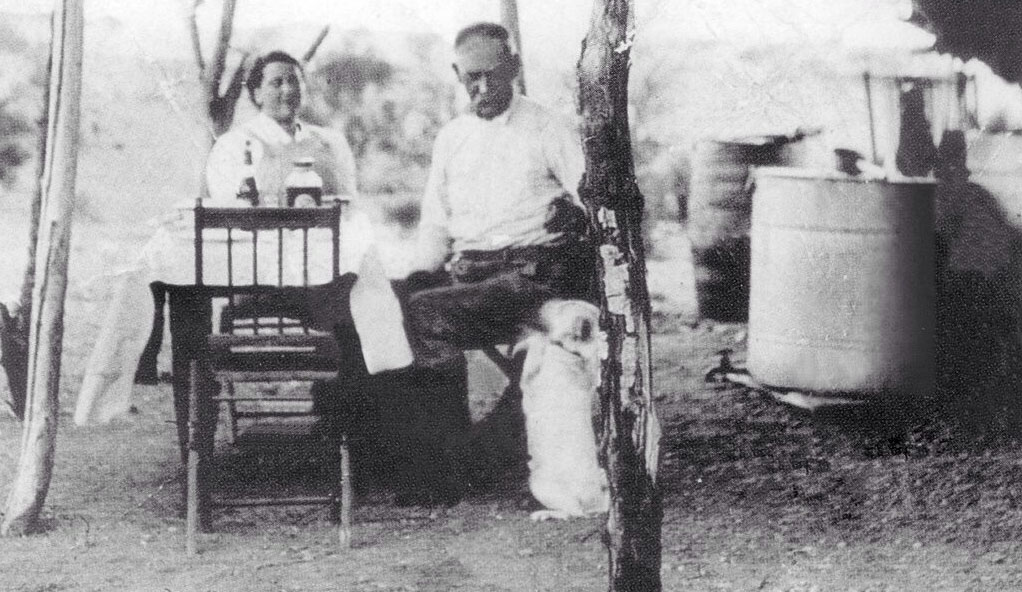 There’s a photograph of Molly Fly (wife of Camillus Fly, yes the same one that had the photography studio at the site of the Gunfight at the O.K. Corral) that was taken in Tombstone, AZ. By Mollie’s feet is a Redbone Coonhound. The photograph started me thinking about dogs out West. In the film Tombstone, Morgan and Wyatt are shown in the Oriental feeding noodles to a hound dog, but was there ever an Earp hound like the one in the film?

Dogs out West were working dogs. They were used for hunting, killing vermin or as guard dogs. There were a lot of hounds and terriers and it was not unusual for men to own several hounds for hunting. This provided both entertainment for the men and also a supply of meat. Hounds were often used in Dodge City to hunt antelope. Coursing was an extremely popular sport, think of it as being a sort of wild version of dog racing. The dogs chased wild game, but it was a real hare rather than a mechanical hare and it wasn’t on a track, but out in the wilds.

The Huntin’ Dogs of Dodge City

James ‘Dog’ Kelley was the Mayor of Dodge City, Kansas and earned his nickname through his love of hunting and coursing with dogs. He had one of the largest packs of dogs in Dodge City that was made up of imported Russian Greyhounds some of which were said to have cost as much as $200 each. Keep in mind that in the 1870’s that was the price of a good horse never mind a dog.

One such dog, a six-month old puppy named Jim went missing during an antelope hunt in 1872. Kelley returned to the location of the hunt and followed a trail of dead antelope until he finally found Jim, lying down exhausted. Kelley rode back into town with Jim slung over his saddle. During one hunt, Kelley reportedly won $20,000 after his dog proved himself better than any of the others.

When I first began reading about Dodge City as research for my novel, A Gentleman in Hell, I was very taken by a photo of Mayor Kelley with this dogs. It got me thinking about Wyatt Earp. Would he have ever received a puppy as a gift from his boss in Dodge? What would it be like? I came up with a backstory for my book about Prospector, a greyhound mongrel who is given to Wyatt by Mayor Kelley. Prospector follows Wyatt like a shadow, and even helps to find Doc Holliday after he collapses in the street. In the end, Prospector becomes Morgan’s dog and sadly he demonstrates his loyalty to Morgan by howling in the card room at Campbell and Hatch’s after Morgan is fatally wounded. I wish I could have included more about Prospector in my book, but my book is about Doc Holliday and his friendships with Wyatt Earp, Morgan Earp and Bat Masterson, so my fictional hound had to take a backseat to the main characters a lot of the time.

Was there a real Prospector in the Earp family? I like to believe there was, although we’ll never really know. I’ve always had a strong feeling that Wyatt was a dog lover. I can imagine him always having a dog by his side. Sadly the only time a  dog was mentioned in conjunction with the Earps was after Morgan was murdered. Reporters in the Tombstone Nugget described the following:

“At the front door of the saloon stood a hound raised by the brothers who with the instinct peculiar to animals seemed to know that his master had been struck down, and despite entreaties remained whining and moaning, and when the body was taken to the hotel, no sadder heart followed than that of the faithful dog.”

We do know that in Wyatt’s later years he owned a dog named Earpie.  He would travel with Wyatt and his wife Sadie out to their Happy Days Mining Camp near the Whipple Mountains in California. My favorite Wyatt Earp photo was taken at the campsite and Earpie is clearly depicted begging food from Wyatt. He’s not long and lean like my imagined dog Prospector is in my book. Earpie looks more like a mutt with perhaps a little bit of Jack Russell terrier in him. Clearly he was well fed too!