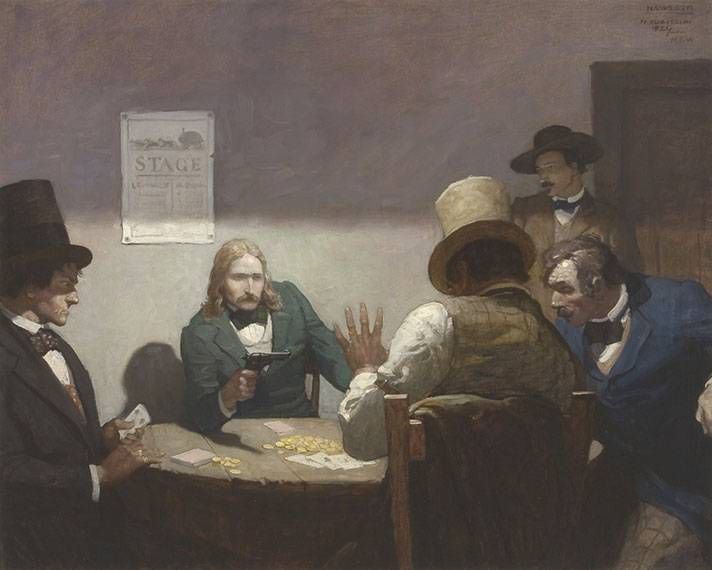 I was really inspired by the painting of Wild Bill by N.C. Wyeth. It was on the cover of a compilation of western stories I owned back when I was in college. The guy at the back of the painting caught my eye. He looked the way I imagined Doc Holliday should have looked back in the day. Perhaps it’s one of the side-effects of loving the film Tombstone. Now I’m not sure Doc would have looked quite like that, but one thing’s for sure, that painting inspired me to write the following gambling scene in A Wicked Little Town.

An Excerpt from A Gentleman in Hell

“He walked down the street until the misty haze of cigarette smoke beckoned him into the Lady Gay Saloon. He wandered in through the elegantly carved bat-wing doors. The smoke rushed out to great him. He stood for a while, mapping a route through the Faro banks, drinking tables and standing cowboys. After some consideration, he proceeded forward and made his way through the crowds. On each side of the saloon, different games progressed. There must have been at least three Faro banks running that night. In the far corner a roulette game rattled and down beside the bar, a game of ‘chuck-a-luck’ was in action. Cowboys huddled around the little cage that held three dice. The dealer brought the cage down onto the table with a clunk and everyone scrambled to see the faces of the dice. Two dice showed one dot, the other showed five. Words of ‘hard luck’ and ‘better luck next time’ were called and the next cowboy stepped forward, pushing his coins to the dealer.

Doc pushed his way through the crowd, to the edge of the long, mahogany bar. He ordered bourbon, took the bottle gladly and handed over his hard-earned money. He gazed around the bar for a table but was out of luck, there wasn’t much room to stand. He took a deep breath and headed towards a door at the back of the saloon. Every step was littered with discarded cigarette and cigar butts giving him a spring in his stride. As he moved towards the door, the cigarettes disappeared. He pushed the swing door open and stood on the mud encrusted, red carpet.

The sudden silence after the noise and bustle of the main saloon was shocking. Doc stood in the darkness and took in the scene. The smoke reflected off the lantern light and cast ghostly shadows on the walls. The poker table stood illuminated in the darkness, its green felt shone brightly. Doc walked through the shadows, trying not to disturb the players. He studied the game in progress, a maneuver that only true poker sharks practiced. He examined each interaction, noiseless conversation between players, movement on movement. From high above, a smart player could absorb the styles of his future opponents.”