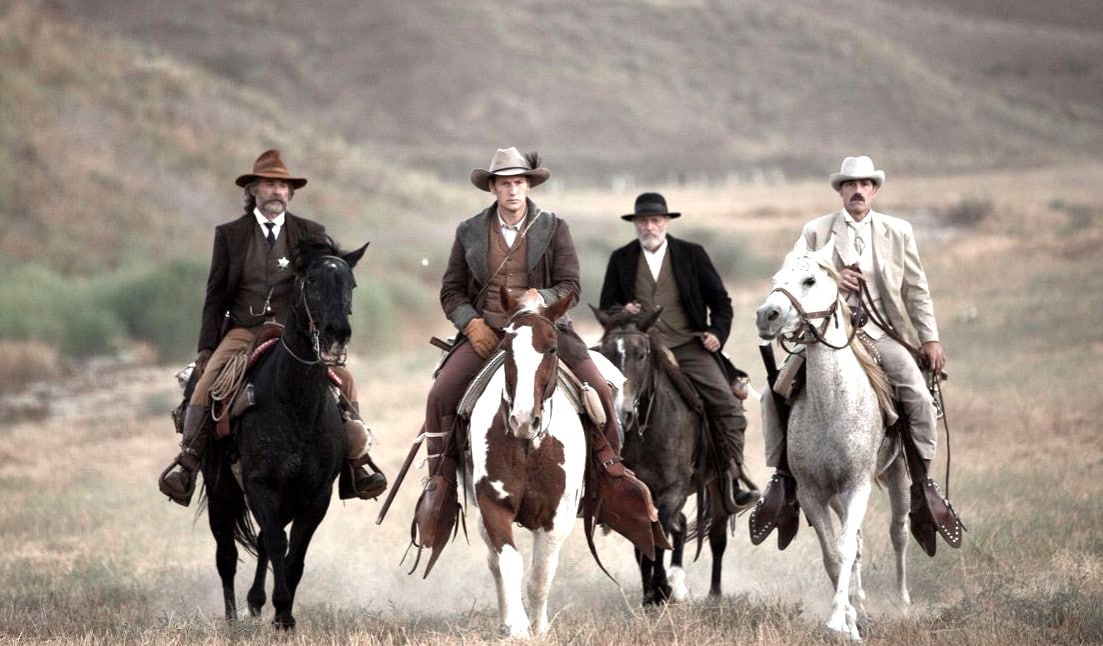 Tonight I made corn chowder and I don’t want to brag too much, but it was good. It’s a freezing cold night here in Kentucky and there’s nothing like a bowl of homemade soup with some warm rolls to make you feel warm and cozy. So why am I talking about chowder? Well I watched the horror western Bone Tomahawk last week and there’s a scene where the town sheriff (Kurt Russell) is making chowder and serves a bowl to his ageing deputy, Chicory (Richard Jenkins). Long story short, after watching that particular scene me and my husband had to have some homemade corn chowder.

I don’t normally review films, but I felt like I needed to give you a short review. If you haven’t heard all ready, the basic plot of this film is that a sheriff and his posse, including the main character, Arthur O’Dwyer (Patrick Wilson), who has a  badly injured leg, go out to stop a group of cave-dwelling cannibals who have taken some of the townsfolk, including O’Dwyer’s wife captive. The film is a strange mix of western genre and horror, but the characters are very well defined which makes the story somewhat painful once it comes to its final conclusion. I’m not going to spoil anything for you, you’ll have to watch and find out for yourself.

Bone Tomahawk is full of human moments like the chowder scene and that’s what makes it so compelling. It’s the simply every-day things like the sheriff making soup or the posse making a camp fire that bring the film to life and help to add tension and color to the characters. The men solve problems together, they help one another, they argue and fight. They come across as real people.

If you love western history as much as you like your westerns then you’ll also enjoy all the little details in both the town, Bright Hope and in the trail scenes. There’s bar towels hanging from the bar, everything in town looks newly built and painted, like you would expect a new town would. The saddles are not modern western saddles but have the deep set 1880’s style saddle tree. John Brooder, the gunfighter, wears a cream bowler. How often are bowlers worn in western movies? Hardly ever and yet they were truly the hat of the frontier. Brooder also carries a brass telescope that he bought in Germany which is his pride and joy. One of the men rides a small pony which is historically accurate for the times.

I will warn you though, since the peaceful scenes are so detailed, so too are the more graphic, horror scenes. This is not your Saturday matinee, where people get shot and seem to suffer nothing more than a dusty bottom when they hit the ground. Some of the scenes are brutal, there are amputated limbs, impaling, blood and plenty of sound effects to go with it. I think the special effects people must have had a ball chopping watermelons and cabbages galore for this movie. If you’re not into that kind of thing, you might not enjoy this film, or perhaps someone can give you a heads up to close your eyes at the appropriate sections, (or perhaps I’m just a wuss.)

Now on to Kurt Russell, he is perfect as the town sheriff.  He’s tough, practical and compelling. Kurt pulled out and dusted off his best Wyatt Earp for this role, imagine Earp as an older man. Am I complaining?  Nope not at all. If Kurt Russell just made westerns for the rest of his career, I’d be delighted.

To sum up, I love this western. It’s fresh and original, funny and heart breaking. You need to check it out!