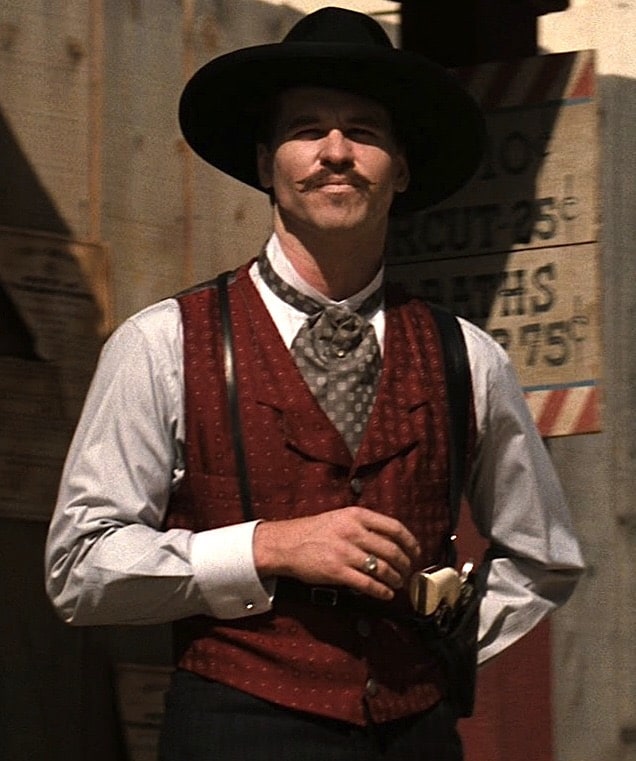 So you’ve seen the movie Tombstone and the scene where Doc Holliday and Johnny Ringo fight and now you’re wondering what on earth “I’m your huckleberry” means. It’s one of those little things that’ll drive you crazy wondering isn’t it?

So What Does “I’m Your Huckleberry” Mean?

In short it means I’m the one or I’m the guy for the job.

A huckleberry is a small round wild berry. There are several different kinds, some blue and some red. They taste similar to blueberries. What did the good doctor have to do with these berries?

Okay now you’re thinking, “19th century people used slang? Get out of here.” Well they did and a particularly popular little phrase was huckleberry. It was particularly fashionable around the end of the 19th century. People used it as a compliment as a replacement for sweetness or darling. Or just to describe someone who was really the best. “A true huckleberry”. It was also used in some gambling circles. This is where Doc comes in. You could “bet a huckleberry to a persimmon” Which would mean to place a small bet.

Where does Mark Twain come in to it?

Well as you’re probably aware, Mark Twain wrote The Adventures of Huckleberry Finn. It could be said that his book helped to maintain the Huckleberry craze. “But hold on,” you say. “This book was published in 1884. Isn’t it a bit late to be used in reference to Doc?” Well yes, you’re right, but remember this is the second book in a series. The first book, The Adventures of Tom Sawyer was written in 1876. It’s in this book that the character of Huckleberry Finn is introduced.
Here’s a little sample. It’s fun to think of it in terms of Doc and Ringo.

“Tom was like the rest of the respectable boys in that he envied Huckleberry his gaudy outcast condition, and was under strict orders not to play with him. So he played with him every time he got the chance.”

I think that Doc is implying that he’ll be Huckleberry Finn to Johnny Ringo. It’s a cute way of saying that he’s going to bring Ringo trouble. Here’s a little bit that seems to work in reference to Tombstone and certainly some of the other scenes that involve Doc.

“nobody forbade him to fight; he could sit up as late as he pleased. …In a word, everything that goes to make life precious, that boy had.”

A huckleberry short of a pie

Okay. Well if you’re not all clued up about huckleberries after all that, I don’t know how else to convince you. I’m all huckleberried out. Just to round things off though, here’s a recipe for huckleberry pie. Enjoy!

Sounds good! Surely something that would go down well while watching a movie. I’m sure you don’t need any encouragement as to which film that would be.