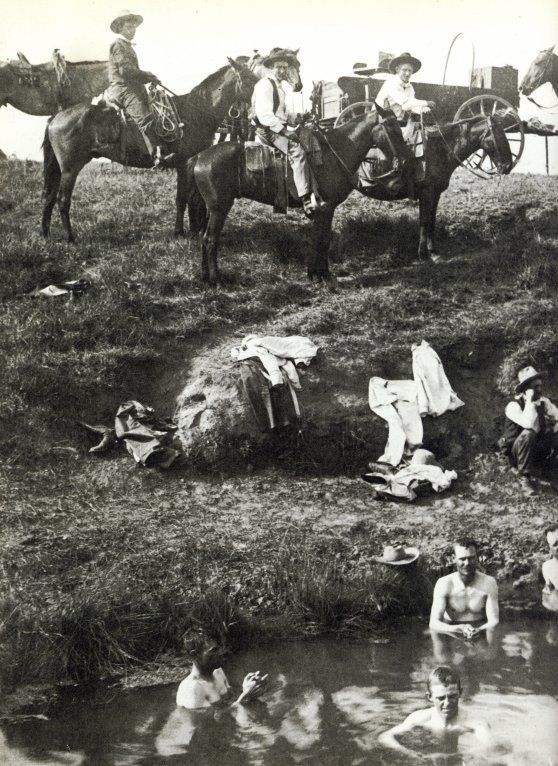 Whenever the subject of personal hygiene on the frontier is raised, everyone rushes to discuss how stinky people were back in the ‘old days’. Granted, I’m sure there were smelly people, but I think it’s unfair to lump all people from that era in one large reeking group. There were different levels of hygiene depending on your situation. How often do you take a bath? I mean literally take a bath? Think about it for a second…

I think one of the problems in thinking about washing in the 1880’s is we read vague accounts of people who only bathed once a month and you think, ‘how awful.’ The truth is we don’t take a soak in the tub everyday either, but we do shower and wash our hands. My point is, it wasn’t practical to have a large soak in the tub  on a daily basis on the frontier, but that doesn’t mean that people didn’t wash at all.

Picture yourself getting up on a cold morning, filling a basin with hot water from a kettle and giving yourself a good wash with a little bit of soap and a flannel. The crucial thing here is to hit the main stinky areas; face, armpits and privates, even your feet if you’re feeling adventurous. The sensation of heat evaporating from your body is invigorating to say the least. For those that were in town, a weekly or monthly bath would be taken in addition to the daily sponge bath.

In 1879 writer Robert Louis Stevenson rode the immigrant train journey from Chicago to California. He wrote about the basic living conditions on the train.

“At Ogden we changed cars from the Union Pacific to the Central Pacific line of railroad.  The change was doubly welcome; for, first, we had better cars on the new line; and, second, those in which we had been cooped for more than ninety hours had begun to stink abominably.  Several yards away, as we returned, let us say from dinner, our nostrils were assailed by rancid air.”

He also wrote in a letter to a friend. “We have a tin wash-bowl among four.” Stevenson was roughing it. Certainly, the experience of sharing with strangers would be a bit of a conversational ice-breaker to say the least. It does however show that even in third-class travelling conditions, that people did try to keep clean and that for someone like Robert Louis Stevenson, the idea of going more than 90 hours without washing was just as unacceptable as it would be today.

The washing arrangements on the train, while basic were preferable to the average cowboy on a cattle drive. The cook at the chuck wagon heated water in a large kettle over the camp-fire. A communal wash basin and towel were used to wash hands and faces before meals. If you imagine how many men worked a cattle drive (I’m going to guess twenty at least) and think that these guys would be sweaty and dirty from riding in all kinds of weather and handling various ends of cows and horses, you can imagine the color of the water in that bowl. I’m going to guess the towel wouldn’t have been that pristine either. It was probably air-dried on the wagon from the previous meal. The average cowboy probably didn’t enjoy a good dunk unless they came across a river or rode into town and bought a soak in a hot bath. On a positive note, at least they were out in the fresh air 24-7. I’m sure the smell of leather, horses and cattle took the edge off the aroma of body odor. Although it must have been a shock for the townspeople once the cowboys hit town.

Another irony in all of this is that these same people were living in an era where everyone was becoming more and more bodily aware. Bad breath and body odor were becoming important enough topics to even warrant advertising space in newspapers.

Toothpaste and brushes were available. Toothpaste has been around in many forms since 5000 BC. In fact Colgate launched their first minty toothpaste in 1873, although it was sold in a jar not the tube we’re familiar with. Toothpaste in a tube wasn’t invented until 1892. There was also mass-produced  tooth powder, although if you couldn’t afford any of that, baking soda or salt was an alternative or even plain soap. Wood-ash was also readily available. Can you picture the average cowboy, waking up, eating breakfast and getting a little ash from the spent campfire to rub on his teeth with his finger? Maybe not although history can be pretty strange sometimes. The truth is not everyone would have brushed twice a day, but the flip-side of that is that their bad breath and teeth may not have been embraced joyously by all. I found a wonderful recipe for toothpaste in the Dodge City Times.

The first deodorant to be mass-produced was Mum in 1888. I’m not going to pretend that there was an alternative before then. I’m sure stinky armpits were just a part of everyday life (see above reference to washing vitals with a washcloth) There was eau de cologne for men that wanted to smell nice.

More emphasis was put on brushing the hair thoroughly rather than washing on a daily basis. However, this doesn’t mean that people didn’t wash their hair. All kinds of homemade concoctions were applied to condition and clean hair. Both egg yolks and the whites were popular. Presumably you’d have to be careful with the hot water or you would end up with a lovely concoction on your To. Vinegar was used as a rinse to give shine and to take out any residual soap. Herbal rinses such as rosemary water were also sometimes used. Realistically, washing hair, especially in the winter wasn’t always practical and bicarbonate and soap could be harsh on hair. There were powdered shampoos that could be brushed through the hair and also conditioners that were left in the hair. Or if you were a man, you might choose to get your hair washed at the barber’s.

So what do you think? I hope you maybe have a different view of hygiene in frontier towns. The important thing to realize is that people did have standards. There is no point in making a sweeping statement about all people out West being smelly when it simply wasn’t true. People used what they had and improvised. Not everyone could afford to buy toiletries and not everyone had access to unlimited amounts of hot water, but they did their best to keep clean and people did care about the way they presented themselves to others.

1 thought on “Keeping Clean in the Dirty Old West”